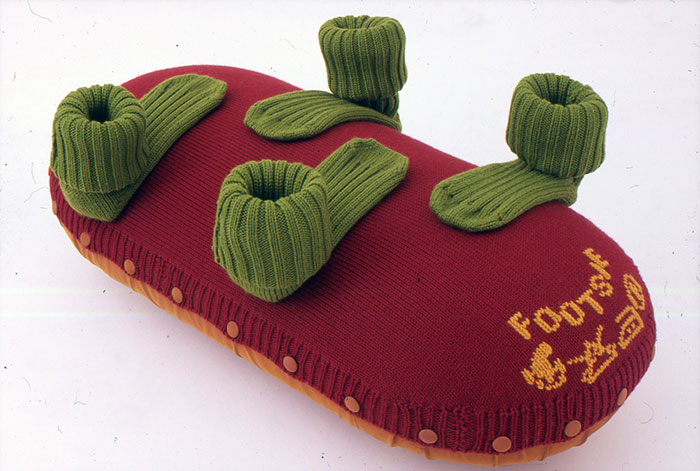 This commission came about in an unusual way. I had never met Mary Little before but we had a private client in common. The three of us were at the Jerwood Furniture Awards at the Crafts Council Gallery in London where Mary was exhibiting, having been short-listed for the award. The client introduced us saying that he had a plan for the two of us. He wanted to commission us to make him something although he knew that we had never met before and that we were unfamiliar with each others work. He rang Mary the next week with his budget and said that we were to make him a surprise. He did not want to see any working drawings or discuss the piece. We were just given a cheque up front and told to get on with it.

Mary and I met twice. The first time to brainstorm and to get to know each other and our respective work. The second time to come up with a final design. We phoned each other continuously and faxed and posted drawings and colour ideas. Mary also sent the client a contract. It was a straightforward process if a little slow. The collaborative design process was very inspiring. It pushed us further than we could ever have got alone and took us off in new, unexpected directions. Neither of us could have come up with the piece alone.

Our final design, “Footsie”, satisfied us both in terms of aesthetics, function and form. It was also a piece which fully represented both of us. We had conceived of it together but we now had to use our individual skills to fulfill it. Mary started by making the base and then it was passed backwards and forwards between us with me doing the knitting and Mary finally upholstering it.

“Footsie” is a large, lozenge shaped footstool on rockers. The upholstered stool has buttons sewn around the perimeter, onto which a knitted cover is buttoned. The knitted cover has two pairs of socks attached to it, one pair facing the other. When placed between two seated people they can rock it by putting their feet into the socks and moving their feet backwards and forwards. I also embroidered our names “Little Robins”, the word “Footsie” and the cleaning instructions onto the knitted cover in a contrasting colour.